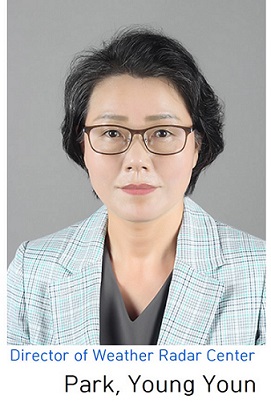 The Increasingly frequent high-impact weather (HIW) events including localized heavy ra infalls and typoons, possibly associated with global warming, have greatly stimulated the community’s need and demand for reliable weather information. As a result, there is a gr- owing emphasis on radar data, which are used not only for real time HIW monitoring but also as input data for numerical prediction and hydrometeorological models.

There is accordingly a particularly pressing need to have in place an optimal radar operation framework so as to maximize the accuracy of radar observations.

The Weather Radar Center (WRC) was established in April 2010 to coordinate the processing, analysis, and utiliztion of radar data indivisually collected by domestic agencies (KMA [Korea Meteorological Administration], MLTM [Ministry of Land, Transport. and Martime Affairs], and MND [Ministry of National Defense]) and to facilities access to the lat- est weather radar technologies, WRC will serve as Koreas interagency hub for weather radar observations through these efforts.

WRC will support the continued development of weather services for the protection of life and property, and the furtherance of public welfare, WRC will also make every endeavor to promote koreas meteorological services.

We at WRC will protect lives and property of citizens and contribute to the development of the weather service for promoting the welfare of the public, and always do our best to jump up to being a weather power.